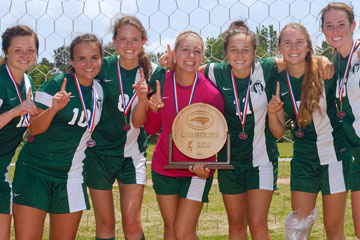 DAVIDSON, NC – On Saturday, May 16, the Woodlawn School girls soccer team capped their season by winning the NCISAA 1A State Championship, defeating #1-seeded Halifax Academy in the championship game by a score of 3-1. This is the first state title for Woodlawn in the first season that they were eligible to compete in the post-season tournament.

Halifax entered the finals with a 19-0 record on the season, while Woodlawn carried with them a 10-game winning streak. The opening minutes of the game were tense and evenly contested with both teams finding it difficult to create scoring chances. But in the 25th minute, senior Rebecca Coutinho intercepted a pass 25-yards from goal and struck the ball hard into the upper corner of the far post for Woodlawn’s first goal.

From there, Woodlawn captured the momentum of the game, and five minutes later tallied a second goal as senior Clare Robinson volleyed home a cross from Rachel Coutinho. “Our second goal today was the goal of the season and one of the best goals I have seen scored at this level,” reflects Coach Tim Helfrich. “Rachel’s pass was picture perfect, and Clare showed incredible class and technique with her one-time finish out of the air. It also gave us a big lift going into halftime.”

Coming out of halftime, Woodlawn’s defense, anchored by senior goalkeeper Elia Ramirez and senior defender Rachel Coutinho, continued to stymie the Halifax offense, which entered the game averaging more than 4 goals per contest. But Halifax finally got on the board with when they finished off a loose ball in the box to bring the game to 2-1 with ten minutes to go.

“When Halifax scored they got an enormous boost of energy and confidence” said Helfrich. “It was a real test for our girls to respond to that energy at a point in the game where fatigue was starting to play a role.” Woodlawn was playing its second match in less than 24 hours.

Woodlawn got the response it needed when Robinson intercepted a Halifax pass near midfield. She drove 50-yards with the ball, eluding several would be tacklers before finally hitting a left-footed shot that beat the Halifax keeper to the near post and gave Woodlawn a 3-1 lead with only five minutes remaining. The score would remain until the final whistle.

“The team truly earned this trophy, “ says Helfrich. “We were not playing championship soccer at the beginning of the season. I challenged the team to get better each day, and they did just that. These past few weeks, the girls really hit their stride and started playing some wonderful soccer.” After their 5-0 semifinal win over #2 Burlington School, Helfrich reports that the opposing coach simply said, “Wow.”

Woodlawn was led this season by seven seniors. Three seniors, Rachel Coutinho, Rebecca Coutinho, and Clare Robinson were honored as members of the all-state team following the conclusion of the match.