Schneider, Bowman Earn Runner and Coach of the Year Accolades 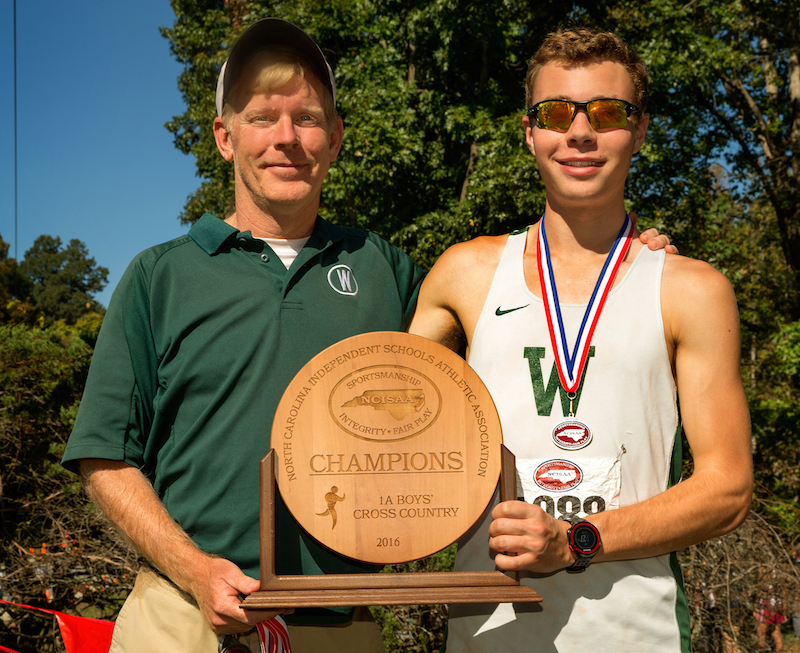 DAVIDSON, N.C. – Senior Quinn Schneider set some lofty goals for his final high school cross country season - he wanted to lead his team to their third straight NCISAA 1A state championship, and he hoped to break the 16:00 barrier in the 5K distance, something no Woodlawn runner had done. By mid-season, he had already fulfilled one of those goals, shattering his personal record and the Woodlawn 5K record with a 15:40 at the Great American Cross Country Festival in Cary. As the season drew to a close, Quinn kept up the intensity, breaking 16:00 again as he successfully defended his SPAA Conference individual title and, in late October, repeating as the NCISAA 1A individual champion and leading the Woodlawn boys team to its third state title.

“Perhaps the most significant highlight for me this past season was winning the team state cross country championship,” says Quinn. “It was very close and there was a lot of nervous tension as the officials were scoring the meet. I can remember seeing a twitter feed on my phone as we were running our cool down that announced we had won! That was a big moment for us all — that and dumping a container of Gatorade on Mr. Bowman, which took an enormous amount of planning to ambush him!”

Quinn’s success drew the attention of a number of college coaches, and in December, he committed to run for the US Naval Academy - the first Woodlawn student to matriculate to a service academy.

But the accolades didn’t stop there - as 2016 wound down, Quinn was recognized as the NCISAA 1A Cross Country Athlete of the Year, an award voted on by all NCISAA coaches. He was certainly a favorite to win this honor, since the running media had gone even further at the end of the season – referring to him the GOAT (greatest of all time) in NCISAA 1A cross country history. Alongside Quinn’s honor, Coach Dwayne Bowman, whose boys and girls teams have captured four state titles in the past three years, was named NCISAA 1A Cross Country Coach of the Year.

“I’ve had Mr. Bowman as my coach for four years,” says Quinn. “We rarely repeat a workout in an entire season. You never know what the workout will be but it always promises to be interesting. I remember running a distance workout on the roads and a dog followed us all back to Woodlawn’s campus. When he saw us with the dog, he got us a leash and made us run the dog all the way back. Mr. Bowman always has a strategy and you can tell he puts a lot of time into customizing our workouts. A lot of the time we’re all doing slightly different things, but he’s still able to make us feel like a team. He’s always talking to us in practice and checking in to see how we’re feeling physically and how we’re doing in life, along with telling us interesting stories and random facts we all find pretty enjoyable — it’s never just all about running with Mr. Bowman. He’s a mentor to me in many areas. I can ask him anything.”

As icing on the cake, Quinn was named the 2016 Charlotte Observer Runner of the Year - an honor reserved for the most impressive high school runner in any classification (public or independent) in the Charlotte metro region.

Coach Dwayne Bowman has watched Quinn grow as a student-athlete over the past 4 years and noted that Quinn’s incredible work ethic has really been the key to his success - he knows how to set goals and then go out and do whatever is necessary to meet or exceed his objectives.

Coach Bowman stated, “Quinn takes great pride in continuing the tradition of Woodlawn’s excellence in distance running - he will become the fifth Woodlawn graduate to join an NCAA college cross country team. At the individual level, Quinn is already a 3-time state champion (twice in cross country as well as the 2016 NCISAA 1A/2A 3200m champion in track), but he also relishes the camaraderie with teammates and the legacy that these cross country and track teams are leaving.”

Despite the notoriety that has accompanied all of these honors, Quinn surprised everyone (including himself) by attracting national attention in the first few days of 2017. When six inches of snow fell on Woodlawn’s campus in early January, Quinn was not especially excited about doing his workout on a treadmill - so he shoveled off one lane of Woodlawn’s new 400-meter track and filmed his efforts with a camera-equipped drone. After placing the edited video on YouTube, he started getting calls from a wide variety of media - TV stations all over the US and Canada, the Washington Post, ESPN - and they all ran his story, resulting in over 35,000 views of his video in just a few days!