Schneider Signs with US Naval Academy 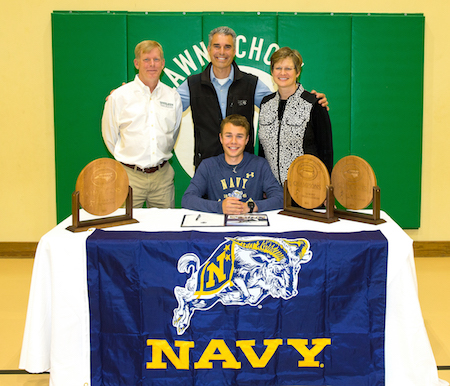 DAVIDSON, NC — Upper school students and faculty gathered in the Red Barn on April 19 to witness senior Quinn Schneider’s signing ceremony. Quinn has committed to attend the US Naval Academy in Annapolis, Maryland, where he will run on the varsity cross country and track teams for the Midshipmen. Navy has a stellar cross country tradition, having finished first for the past four years in the Patriot League (NCAA Division I). The team also advanced to the Division I national championship this past season, along with just 30 other college teams.

Quinn is an accomplished long distance runner who has represented Woodlawn at the highest level on both the varsity cross country and track teams for the past four years. He has been instrumental in Woodlawn’s three NCISAA 1A state cross country championships - finishing second individually in 2014 and then placing first the 2015 and 2016 state meets. In his senior season he was so dominant (running a school record 15:40 for the 5K distance) that he was named Charlotte Observer Runner of the Year, as well as NCISAA 1A Athlete of the Year for 2016.

Quinn’s long distance prowess extends to the track as well. He turned heads in his junior season when he upset the favored runner in the NCISAA 1A/2A state championship 3200m event, recording a time of 9:31 to win the race and shatter the Woodlawn school record by 16 seconds. This season, he is picking back up where he left off - he’s already run a 4:22 for 1600m (equalling his personal record from last season) and has his sights set on even better performances as the track season culminates at the state meet in May.

Quinn’s work ethic is legendary - both in the classroom and on the track and trails. He received a good bit of notoriety this past winter when an unusual 6-inch snowfall covered the track in January. Quinn shoveled off lane 1 of the track in order to complete his workout, while documenting this unusual feat with a drone-based camera system. The short video was featured in the Washington Post, and was picked up across the country on TV news stations and websites (it received over 43,000 views on YouTube).

Quinn becomes Woodlawn’s first-ever graduate to enroll in a military academy - he was quickly followed by classmate and fellow all-state runner Zachery Lorch, who received an appointment to the Air Force Academy. He leaves very large shoes to fill at Woodlawn, but he will serve as an inspiration for Woodlawn students for many years to come.

Patrick and Lore Schneider of Cornelius are Quinn's parents.